Choose one example of Hindu art from the Classical or Medieval period that is not covered in the lecture. It can come from your textbook or the internet - just make sure that it fits the criteria (it must be a Hindu religious work and must come from the correct era - approximately 4th century to 15th century). The website for the Metropolitan Museum of Art (Links to an external site.) is a good place to browse for examples.

Analyze the object you have chosen with an emphasis on how it effectively fulfills its function. This means you must first identify its function (it may have more than one!) - is it meant to educate in some way? does it tell a story? does is act as an anchor for meditation? does it serve as a vessel through which humans can come into contact with a deity? Next, 'break down' the work visually and explain how exactly it communicates what it is supposed to.

Please upload an image of the work you have chosen as part of your response. This should be embedded in your post (click on the small picture icon in the rich text editor to upload), not included as an attachment.

Read through your classmates' posts and engage substantively with at least one of them. This can mean pointing out something you think their analysis might have missed out on or reflecting on how their analysis has affected your understanding of your own chosen image. 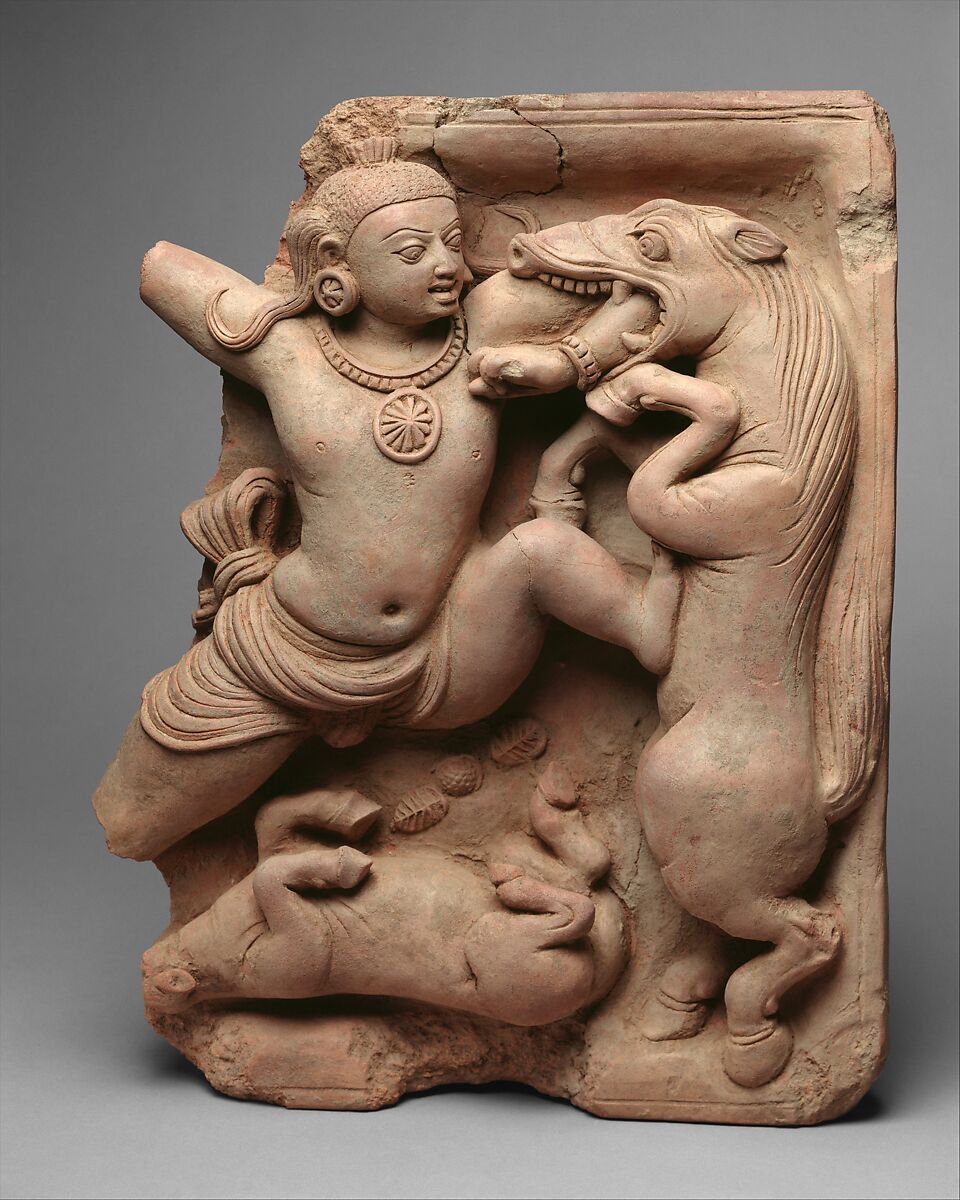 The function of this terracotta sculpture, “Krishna Killing the Horse Demon Keshi” is to tell a story and to educate the followers of Hinduism. In the sculpture, one of the Avatars of Vishnu is killing a demon that is in the form of a horse. Using horses as sacrifices was very important in earlier Indian Verdic cults therefore, the killing of a demon in the form of the horse is a reference to previous eras. The sculpture tells the story of how Krishna was able to slay a demon who had taken the form of a horse. Krishna is portrayed as very strong and having very exaggerated masculine characteristics. This shows that he is powerful enough to kill a demon with his bare hands and that he is godly. Krishna appears with one foot on the horse's stomach while his elbow is choking the horse all with his bare hands which is a heroic posture which suggests he is saving people from this demon. This sculpture is meant to capture the moment right before this demon is slayed because although it is now gone, his other arm is preparing to hit the demon in the face. Underneath Krishna and the demon, is a dead horse and feces that came from the horse once it was killed. Therefore, this sculpture both serves as a form of storytelling as well as educating people on the strength of the god Vishnu’s avatar.

The art piece that I chose to examine closely and learn more about is “Vishnu Reclining on the Serpent Ananta.” This scene can be found on the south side of the Deogarh Temple and dates back to the 6th century. Vishnu is a Hindu deity that is the savior of man and the creator of the universe. The purpose of this relief is to tell the story of the creation of the universe. Vishnu creates the universe while he is sleeping. When the universe is first created, Vishnu brings Brahma into it first so that he can create planets, stars, and other demigods. Each demigod was given its own purpose remain in charge of its given cosmic order. In the picture, Brahma is sitting on a lotus which is supposed to be coming out from Vishnu’s navel. On both sides of Brahma and below Vishnu are other gods and goddesses along with some of their vehicles at the top. The goddess holding Vishnu’s right foot is Lakshmi, who is his consort. She gives off female energy that inspires Vishnu to continue creating. There is a four headed serpent that frames the sleeping Vishnu, who’s name is Ananta. Ananta translates to meanings such as eternal, limitless, or infinite. Thus implying that Vishnu will remain creating for eternity.

Do you similar assignment and would want someone to complete it for you? Click on the ORDER NOW option to get instant services at essayloop.com

Get quality writing services. Claim 20% off your first order

Welcome, get your discount offer by providing your email below.